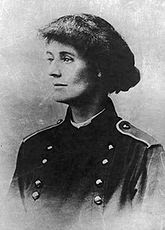 Constance Georgine Markiewicz
Constance Georgine Markiewicz, Countess Markiewicz (née Gore-Booth; 4 February 1868 – 15 July 1927), was an Irish Sinn Féin and Fianna Fáil politician, revolutionary nationalist, suffragette and socialist. In December 1918, she was the first woman elected to the British House of Commons, though she did not take her seat and along with the other Sinn Féin TDs formed the first Dáil Éireann. She was also one of the first women in the world to hold a cabinet position (Minister of Labour of the Irish Republic, 1919–1922).
In 1913, her husband moved to Ukraine, and never returned to live in Ireland. However, they did correspond and Kazimierz was present by her side when she died in 1927. As a member of the ICA, Markiewicz took part in the 1916 Easter Rising. She was deeply inspired by the founder of the ICA, James Connolly and she both designed the uniforms of the ICA and composed their anthem, a Polish song with changed lyrics. Markiewicz held the rank of an officer, making her a decision maker, and more importantly, giving her the right to carry arms.
During the Rising, Lieutenant Markiewicz was appointed second in command to Michael Mallin in St Stephen's Green. She supervised the setting-up of barricades as the rising began and was in the middle of the fighting all around Stephen's Green, wounding a British army sniper. Inspired by newsreel footage from the Western Front, they initially began to dig trenches in the Green. British fire from the rooftops of adjacent tall buildings, including the Shelbourne Hotel, however, soon convinced them of the folly of this tactic, and they withdrew to the adjacent Royal College of Surgeons.
Mallin and Markiewicz and their men held out for six days, finally giving up when the British brought them a copy of Pearse's surrender order. The English officer, Captain Wheeler (aka Major de Courcy Wheeler), who accepted their surrender was a relative of Markiewicz.
They were taken to Dublin Castle and the Countess was then transported to Kilmainham Gaol. They were jeered by the crowds as they walked through the streets of Dublin. There, she was the only one of seventy women prisoners who was put into solitary confinement. At her court-martial she told the court, "I did what was right and I stand by it." Her conviction was assured, only her sentence was in doubt. She was sentenced to death, but General Maxwell commuted this to life in prison on; "account of the prisoner's sex." Some sources report that she told the court, "I do wish your lot had the decency to shoot me" however the alleged transcript reports that she said "you cannot shoot a woman".
The Countess was released from prison in 1917, along with others involved in the Rising, as the government in London granted a general amnesty for those who had participated in it. It was around this time that Markiewicz, born into the Church of Ireland, converted to Catholicism.
In 1918, she was jailed again for her part in anti-conscription activities. At the 1918 general election, Markiewicz was elected for the constituency of Dublin St Patrick's as one of 73 Sinn Féin MPs. This made her the first woman elected to the British House of Commons. However, in line with Sinn Féin abstensionist policy, she would not take her seat in the House of Commons.
Markiewicz was in Holloway prison when her colleagues assembled in Dublin at the first meeting of Dáil Éireann, the unilaterally-declared Parliament of the Irish Republic. When her name was called, she was described as being "imprisoned by the foreign enemy" (fé ghlas ag Gallaibh). She was re-elected to the Second Dáil in the House of Commons of Southern Ireland elections of 1921.
Markiewicz served as Minister for Labour from April 1919 to January 1922, in the Second Ministry and the Third Ministry of the Dáil. Holding cabinet rank from April to August 1919, she became both the first Irish female Cabinet Minister and at the same time, only the second government minister in Europe. She was the only female cabinet minister in Irish history until 1979 when Máire Geoghegan-Quinn was appointed to the then junior cabinet post of Minister for the Gaeltacht for Fianna Fáil.
Markiewicz left government in January 1922 along with Éamon de Valera and others in opposition to the Anglo-Irish Treaty. She fought actively for the Republican cause in the Irish Civil War helping to defend Moran's Hotel in Dublin. After the War she toured the United States. She was not elected in the 1922 Irish general election but was returned in the 1923 general election for the Dublin South constituency. In common with other Republican candidates, she did not take her seat. However, her staunch republican views led her to being sent to jail again. In prison, she and 92 other female prisoners went on hunger strike. Within a month, the Countess was released.
She joined Fianna Fáil on its foundation in 1926, chairing the inaugural meeting of the new party in La Scala Theatre. In the June 1927 general election, she was re-elected to the 5th Dáil as a candidate for the new Fianna Fáil party, which was pledged to return to Dáil Éireann, but died only five weeks later, before she could take up her seat.
She died at the age of 59, on 15 July 1927, possibly of tuberculosis (contracted when she worked in the poorhouses of Dublin) or complications related to appendicitis. Her estranged husband and daughter and beloved stepson were by her side. She was buried in Glasnevin Cemetery, Dublin. Éamon de Valera, the Fianna Fáil leader, gave the funeral oration.
The by-election for her Dáil seat in Dublin South was held on 24 August 1927 and won by the Cumann na nGaedhael candidate Thomas Hennessy.
“One thing she had in abundance—-physical courage; with that she was clothed as with a garment.” —Seán O'Casey
Posted by Unknown at 2:21 PM