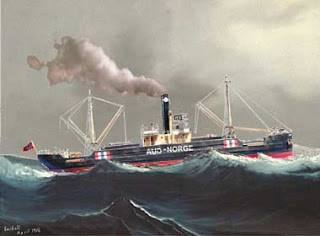 Reserve-Lieutenant Karl Spindler of the German Navy was due to take the Aud (Libau) and Casement to Ireland but the German officer stated that as "Casement had expressed a very strong objection against accompanying us in the Libau, it was finally decided to place a submarine at his disposal. He had with him two companions, Lieutenant Monteith and the Irish sergeant, Bailey. The latter turned out in the sequel to be a thorough-paced scoundrel. The submarine was to put Casement, with his companions, on board the Libau at a rendezvous in Tralee Bay, and I was then to proceed in under his instructions. "
The Aud in fact arrived in Tralee Bay at the agreed time, but her signals went unanswered. Spindler decided to spent the night hiding behind one of the Magharee Islands. At dawn a ship carrying a pilot flag approached the Aud and much to the German commander's surprise the pilot boat hoisted hoisting the British flag of war. Spindler underwent a formal inspection soon turned into a amicable drinking spree during which Spindler learned that the British were on the look-out for a German cruiser carrying arms for Irish rebels. By then Spindler knew that the mission not only had failed, but that it was betrayed. Later on the same day, Good Friday the Aud was arrested . While being escorted to Cork the crew of the Aud sank the ship, identified themselves as sailors of the German navy and surrendered. In fact he voyage of the Aud was compromised from the very beginning, with German codes having been broken, and agents were reporting the movements of submarines and shipping from both the Baltic and occupied ports. The British Naval Intelligence Division (NID) knew that there was an arms ship on the way, but did not know precisely when. Therefore from mid-March 1916, extra patrols were in place all around the West and South Coasts of Ireland to intercept any suspicious vessels for searching
Casement boarded first the U-20, but it had to turn back with rudder problems and instead was taken on the U-19, commanded by Raimund Weisbach, who had previously served as torpedo officer on U-20 and had launched the torpedo that sank Lusitania. During his brief command of U-19, Weisbach delivered Roger Casement along with Bailey and Monteith to Ballyheige Bay in Ireland in hopes that they would foment an uprising that would divert British Troops to Ireland.
Posted by Unknown at 8:29 PM