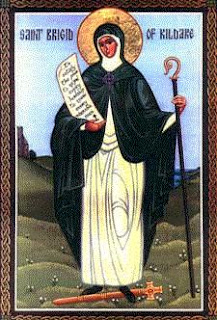 St. Brigid's Cross
Saint Brigid of Kildare or Brigid of Ireland (Brigit, Bridget, Bridgit, Bríd or Bride) or Mary of the Gael (Irish: Naomh Bríd) (c. 451–525) is one of Ireland's patron saints along with Saints Patrick and Columba. Her feast day is 1 February, the traditional first day of spring in Ireland. She is believed to have been an Irish Christian nun, abbess, and founder of several monasteries.
According to tradition, Brigid was born at Faughart near Dundalk, County Louth, Ireland. Because of the legendary quality of the earliest accounts of her life, there is much debate among many scholars and even faithful Christians as to the authenticity of her biographies. According to her biographers her parents were Dubhthach, a pagan chieftain of Leinster, and Brocca, a Christian Pict and slave who had been baptised by Saint Patrick. Some accounts of her life suggest that Brigid's mother was in fact from Lusitania, kidnapped by Irish pirates and brought to Ireland to work as a slave, in much the same way as Saint Patrick. Many stories also detail Brigid's and her mother's statuses as pieces of property belonging to Dubhthach, and the resulting impact on important parts of Brigid's life story.
Brigid was given the same name as one of the most powerful goddesses of the pagan religion which her father Dubhthach practiced. In that religion, Brigid was the goddess of healing, inspiration, craftsmanship, corn, beef, flowers, and poetry, which the Irish considered the flame of knowledge.
Posted by Unknown at 3:38 PM