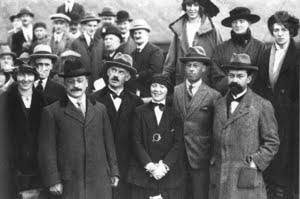 Eamonn or Edmund S. Duggan (Irish: Éamon Ó Dúgáin) (1874 – 6 June 1936) was an Irish lawyer, nationalist and politician, a member of Sinn Féin and then Cumann na nGaedhael.
Born in Longwood, County Meath, Duggan's father was a RIC officer from County Armagh serving in the village, his mother a local woman by the name of Dunne. Duggan qualified as a solicitor and soon became involved in politics. He became a supporter of Sinn Féin and fought in the Easter Rising in 1916. He was subject to court-martial following the Rising and sentenced to three years penal servitude. Duggan was released in 1917 under general amnesty and went back to practicing law. For a time, he also served as Irish Republican Army Director of Intelligence.
Duggan was elected to the First Dáil Éireann for South Meath in 1918. At the end of 1920, he was re-arrested and not released until the Anglo-Irish Truce of July, 1921. After the Truce, he was appointed chief liaison officer for Ireland. In October 1921, Duggan was appointed as one of the five envoys to negotiate and conclude a treaty with the British Government. He signed the Anglo-Irish Treaty, not at 10 Downing Street, but at 22 Hans Place, London.
In the post-Treaty provisional government, he was appointed Minister for Home Affairs and later became parliamentary secretary to the Minister for Defence and to the Executive Council. He declined to go forward in the 1933 general election but was elected to Seanad Éireann. He died suddenly at Dún Laoghaire, County Dublin on 6 June 1936.
Posted by Unknown at 6:40 PM