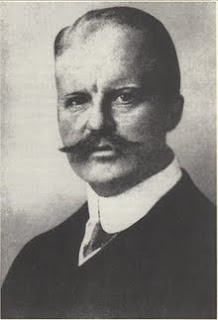 October 5, 1864 - June 6, 1940
He was State Secretary for Foreign Affairs of the German Empire from November 22, 1916, until his resignation on August 6, 1917.
In late 1914, Zimmermann was visited by Roger Casement, the Irish revolutionary. A plan was laid to land 25,000 soldiers in the west of Ireland with 75,000 rifles. However, the German general staff did not agree.
In 1916, Casement returned to Ireland in a U-boat and was captured and executed. A German ship renamed the "Aud", flying Norwegian colours, shipped 20,000 rifles to the south Irish coast but it failed to link up with the rebels and was scuttled. Planning on this support, a minority of the Irish volunteers launched the Easter Rising in Dublin. Though the Rising failed, its political effect led on to the Anglo-Irish war in 1919-21 and the formation of the Irish Free State.
Posted by Unknown at 8:23 PM