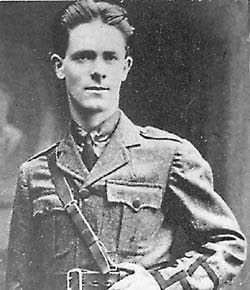 Savage moved to Dublin in 1915 and joined the Irish Volunteers. As a 17 year old he took part in the 1916 Easter Rising in Dublin and fought with Padraig Pearse and James Connolly in the GPO. He was captured by the British Army and imprisoned in Richmond Barracks. On 30 April 1916, he was deported to Knutsford Detention Barracks in Cheshire, England along with 200 other captured prisoners. Upon his release Savage returned to Dublin and resumed his fight for Irish freedom and became a Lieutenant in the 2nd Battalion of the Dublin Brigade. Within republican circles he was known as a shy, slim built, handsome Sligonian who was a popular and trusted comrade especially amongst the likes of Dan Breen, Seán Treacy and Seán Hogan.
Posted by Unknown at 8:26 PM