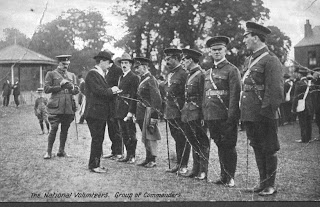 Robert Monteith & Group of Commanders - the National Volunteers
Captain Robert Monteith (1880-1956) was summoned to General Staff in Berlin on 1st March 1916 and was told of the Easter Rising and the German arms that were to be sent by sea to Ireland. Monteith informed Casement, who was motivated to leave his sick bed for Berlin. The Germans wanted to send Casement and all his 56 man Brigade to Ireland with the weapons, so ridding themselves of both Casement and his men.There was a few weeks of bad tempered negotiations between Casement and the German General Staff, as Casement thought the proposed Rising in Ireland was futile and did not wish to send the Irish brigade. Finally, and it is not clear why, the Germans agreed to provide a submarine to take Casement, Monteith and Bailey ( a sergeant in the Irish brigade) to Ireland ahead of the ship, the Aud, carrying the arms.
They set off in the U-20 bound for Ireland on 11 April 1916, but technical problems forced the submarine to return to port. They transfered to the U-20 and set off again on 15 April 1916. The submarine reached Tralee Bay in Kerry on 21 April The reception committee from the Irish failed to materialise. About 2 a.m., Robert Monteith, Daniel Bailey (calling himself Beverly), and Casement climbed into a small boat for the trip to shore. Their boat capsized before they reached Banna Strand, near Tralee. Monteith helped an exhausted Casement to safety on shore. Casement was convinced that the Rising could not work without a large number of German troops, and the best he had been able to obtain was one boatload of arms. Leaving Casement at the ruins of McKenna's Fort, Monteith and Bailey headed for Tralee. About 1:30 p.m., Casement was discovered by two Royal Irish Constabulary officers. He nearly talked his way out of being arrested, but a 12-year-old boy at the scene pointed out a piece of paper Casement had tossed away as the police approached. On that paper was a German code list.
Monteith avoided capture, unlike his two companons, and in December 1916 was finally about to make his escape from Ireland to Liverpool, and then on to New York. The transatlantic journey he made using the false papers of a stoker, and acted that role, for which he was not physically capable, with difficulty. Eventually he was put on lighter work, and managed to get ashore in New York undetected.
Posted by Unknown at 8:24 PM