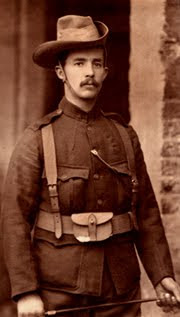 Unbeknown to Childers the Irish Volunteers organiser at Howth, Bulmer Hobson, was a founding member of the Irish Republican Brotherhood, and at Easter 1916 the Brotherhood used the "Howth Mausers" to mount the historic Easter Rising.

Hobson himself did not support the rising and Casement, who had arranged to supply the rebels with a further shipload of arms direct from the German military, was under arrest with his consignment sunk. The uprising was crushed in heavy fighting and was followed by a strict imposition of martial law.

Childers, on temporary leave in London, was shocked by the harsh and summary punishments authorised by General John Maxwell, but as a serving officer he could do little. The violent suppression of the Easter Rising had dismayed Childers and a Westminster bill to extend military conscription to Ireland, while the Army still controlled much of the country in the aftermath of the insurrection angered him further: he described the proposal as "insane and criminal".
Posted by Unknown at 8:58 PM