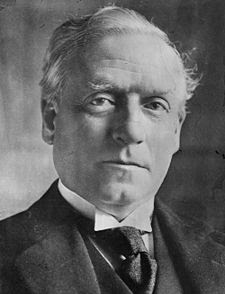 The price of Irish support in this effort was the Third Irish Home Rule Bill, which Asquith delivered in legislation in 1912. Asquith's efforts over Irish Home Rule nearly provoked a civil war in Ireland over Ulster, only averted by the outbreak of a European war. Ulster Protestants, who wanted no part of a semi-independent Ireland, formed armed volunteer bands. British army officers (the so-called Curragh Mutiny) threatened to resign rather than move against Ulstermen whom they saw as loyal British subjects; Asquith was forced to take on the job of Secretary of State for War himself on the resignation of the incumbent, Seeley. The legislation for Irish Home Rule was due to come into effect, allowing for the two-year delay under the Parliament Act, in 1914 - by which time the Cabinet were discussing allowing the six predominantly Protestant counties of Ulster to opt out of the arrangement, which was ultimately suspended owing to the outbreak of World War I in 1914.

Asquith's perceived lack of vigour over the conduct of the war dissatisfied certain Liberals and the Conservative Party. On Whit Monday 1916 Bonar Law travelled to Asquith's home — the Wharf, at Sutton Courtenay, Berkshire — to discuss the succession to the job of Secretary of State for War (Kitchener had just drowned on a trip to Russia — Asquith offered the job to Bonar Law, who declined as he had already agreed with Lloyd George that the latter should have the job), and later told Max Aitken that he had been kept waiting while Asquith finished playing bridge with three ladies, although Asquith's daughter Violet later denied that this had been so. Women's Rights activists also turned against him when he adopted the 'Business as Usual' policy at the beginning of the war, while the introduction of conscription was unpopular with mainstream Liberals. Opponents partly blamed Asquith for a series of political and military disasters, including the 1916 Battle of the Somme, at which Asquith's son Raymond was killed, and the Easter Rising in Ireland (April 1916).
Posted by Unknown at 12:49 PM