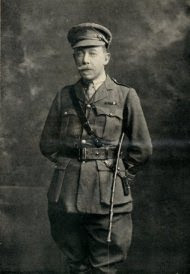 A Dublin-born major in the Royal Munster Fusiliers, Sir Francis Fletcher Vane, was in overall charge of defence at Portabello Barracks but was not present when these executions took place. He arrived shortly afterwards, was horrified at what unfolded. He recognised the killings as murder, and called Hanna Sheehy-Skeffington.

He reported his views (that Bowen-Colthurst was mentally deranged) to the deputy commander of the garrison, Major Rosborough. Rosborough telephoned Dublin Castle and was told to bury the bodies. Vane subsequently travelled to London where he met Lord Kitchener in Downing Street on 3 May 1916. A telegram was sent to Sir John Maxwell, commander-in-chief of British forces in Ireland, ordering the arrest of Bowen-Colthurst but Maxwell refused to arrest him.

Vane was dishonorably discharged from the army in the summer of 1916 owing to his actions in the Skeffington murder case.
Posted by Unknown at 8:26 PM