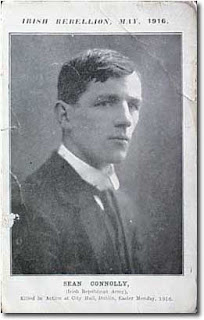 Only a week before the rising, Sean Connolly of the Abbey Theatre was playing the lead role in James Connolly's new play 'Under Which Flag' in its first performance at Liberty Hall. The play was about an Irishman torn between serving in the Irish or the British army, and ended with Connolly raising a green flag and uttering the words 'Under this flag only will I serve. Under this flag, if need be, will I die.'

During the rising, it was Connolly who lead the group that entered Dublin Castle, firing the first shot that killed a British soldier, Castle guard, James O'Brien. Connolly's men moved from there to take up a position at City Hall, where Connolly himself was shot while attempting to hoist to the top of the City Hall dome the very same green flag that he had used in the play. The first to kill, he became the first of the Rebels to be killed in the Easter Uprising.
Posted by Unknown at 8:11 PM