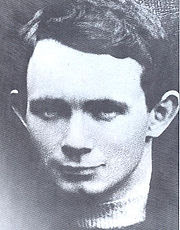 During Easter Week, he fought at Watkin's Brewery, Jameson's Distillery and Marrowbone Lane. Thomas MacDonagh at 3.15 p.m. Sunday, 30 April surrendered to Brigadier-General Lowe. He was then allowed to return to the other garrisons to arrange for their surrender.

Colbert surrendered with the Marrowbone Lane Garrison along with the South Dublin Union Garrison, which had been led by Eamonn Ceannt. When the order to surrender was issued, he assumed the command of his unit to save the life of his superior officer, who was a married man.
They were marched to Richmond Barracks, where Colbert would later be court-martialled.

Transferred to Kilmainham Gaol, he was told on Sunday 7 May that he was to be shot the following morning. He wrote no fewer than ten letters during his time in prison. During this time in detention, he did not allow any visits from his family; writing to his sister, he said a visit "would grieve us both too much."
Posted by Unknown at 8:48 PM