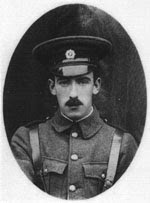 Daly's battalion, stationed in the Four Courts and areas to the west and north of Dublin center, saw the most intense fighting of the rising. He surrendered his battalion on 29 April. In his trial, he claimed that he was just following orders, but was executed by firing squad on 4 May 1916, at the age of 25.

The men in his battalion spoke of him as a good commandant. This opinion was also shared by a British officer that Daly's battalion had captured.
Posted by Unknown at 3:33 PM