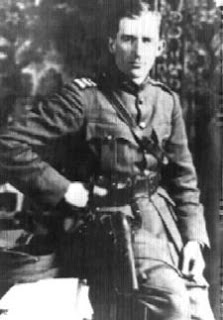 He was second-in-command to the late Thomas Ashe (who would later die on hunger strike) in an encounter with the armed Royal Irish Constabulary at Ashbourne, County Meath during the Easter Rising in 1916. In his recent account of the Rising Charles Townsend principally credits Mulcahy with the defeat of the RIC at Ashbourne for conceiving and leading a flanking movement on the RIC column that had engaged with the Irish Volunteers. Arrested after the rising he was interned at Knutsford and at the Frongoch internment camp in Wales until his release on the 24 December 1916.
Posted by Unknown at 8:53 PM