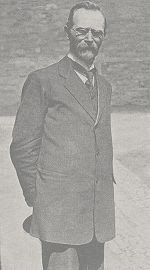 Eoin (John) MacNeill along with Roger Casement started the Irish Volunteers. He was adamantly opposed to an armed rebellion. In fact, Patrick Pearse kept MacNeill out of the loop as to the plans for the Rising. He was a Home Ruler and wanted to wait until the end of the war in Europe to begin Home Rule. He was utterly aghast when the Rising started. He countermanded what Pearse had started leaving those in Dublin to fend for themselves. Pearse attempted to countermand the countermand, but MacNeill's orders went out before Pearse found out about the countermand by MacNeill.
MacNeill went to prison for his part in the Rising, but was released in 1917. He was elected to the British Parliament, but being in agreement with the Sinn Fein policy of abstentionism, he refused to take his seat in the House of Commons.
Posted by Unknown at 3:33 PM