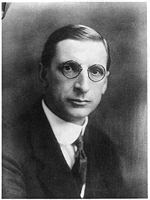 Eamon De Valera
Born 14 October 1882(1882-10-14) Manhattan, New York
Died 29 August 1975 (aged 92) Dublin, Ireland
On 24 April 1916 the rising began. De Valera occupied Boland's Mill, Grand Canal Street in Dublin, his chief task being to cover the south-eastern approaches to the city. After a week of fighting the order came from Patrick Pearse to surrender.
De Valera was court-martialled, convicted, and sentenced to death, but the sentence was immediately commuted to penal servitude for life. It has been argued that he was saved by two facts: firstly, he was held in a different prison from other leaders, thus his execution was delayed by practicalities; had he been held with Patrick Pearse, James Connolly and others, he probably would have been one of the first executed; and secondly, his American birth delayed his execution, while the full legal situation (i.e., was he actually a United States citizen and if so, how would the United States react to the execution of one of its citizens?) was clarified.
The fact that Britain was trying to bring the USA into the war in Europe at the time made the situation even more delicate. Both delays taken together meant that, while he was next-in-line for execution, when the time came for a decision, all executions had been halted in view of the negative public reaction. Timing, location, and questions relating to citizenship may have saved de Valera's life.
Posted by Unknown at 8:36 PM