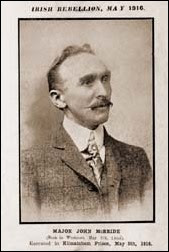 7 May 1865 – 5 May 1916
MacBride, unlike the other Rising leaders, was not a member of the Irish Volunteers, and happened to find himself in the midst of the Rising without notice, but he offered his services to Thomas MacDonagh and was appointed second-in-command at the Jacob's factory. MacBride, after a court martial under the Defence of The Realms Acts, was shot by British troops in Kilmainham Jail, Dublin.

He was executed on 5 May 1916, two days before his fifty-first birthday. Facing the British firing squad, he refused to be blindfolded, saying "I have looked down the muzzles of too many guns in the South African war to fear death and now please carry out your sentence." He is now buried in Arbour Hill Cemetery (Dublin). Yeats, who had hated MacBride during his life largely because of Yeats' unrequited love for Maud Gonne and who had heard negative reports of MacBride's treatment of Gonne in their marriage, gave him the following ambivalent eulogy in his poem "Easter 1916":
"This other man I had dreamed
A drunken, vain-glorious lout.
He had done most bitter wrong
To some who are near my heart,
Yet I number him in the song;
He, too, has resigned his part
In the casual comedy;
He, too, has been changed in his turn,
Transformed utterly:
A terrible beauty is born."
Posted by Unknown at 1:16 PM