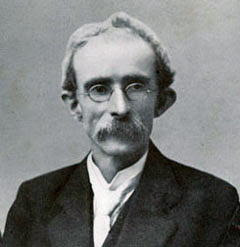 Thomas Clarke was a member of the IRB (Irish Republican Brotherhood forerunner to the IRA) when he was 18 years old. He was the eldest member of the Rising and the first signatory of the Proclamation. Patrick Pearse felt that for all Clarke went through (spending 15 years in prison of a life sentence), Clarke should be the first to sign the Proclamation.
Thomas was stationed at the GPO during the Rising. Thomas Clarke was a mentor to Sean McDermott. Both were executed after they surrendered to the British Army under General Maxwell.
Posted by Unknown at 8:40 PM