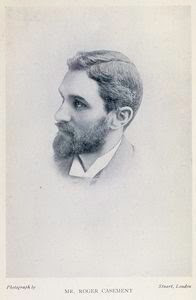 Roger Casement, along with Eoin MacNeill, formed the Irish Volunteers. Casement's job in the Rising was to get the Germans to send arms and soldiers to help in the Rising. Casement was sent by John Devoy to garner support from Germany. He negotiated a declaration from Germany stating that the Germans would not invade Ireland.

It took some time, but he convinced the Germans to let him have a U-Boat to help land on the shores of Ireland. He landed at Banna Strand, Tralee Bay, County Kerry.

Casement was said to have 2 set of diaries, the White Diairies and the Black Diaries. The White Diaries put Casement in a good light. The Black Diaries are rumored to have explicit sexual content regarding his fascination with younger men. After an unsuccessful appeal against the conviction and death sentence, he was hanged at Pentonville Prison in London on 3 August 1916, at the age of 51.
Posted by Unknown at 2:03 PM